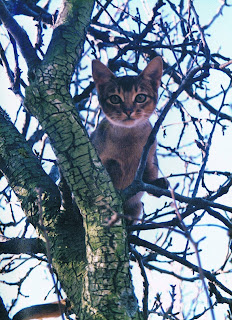 The bonds that develop between animal companions and their human families are not easy to define. Each relationship has its own unique dynamic, and yet, a common thread has become apparent to me. Just as I believe each person in our life is drawn to us for a reason, I firmly believe we share our homes with our animal companions in a similar way. They come to teach, to guide, to illuminate and inspire us in ways we cannot begin to imagine until we have experienced them.

Sahara was an Abyssinian cat that lived with me for a while. She was 12 weeks old when I collected her, by car, from a breeder in Durban North. I had taken 6 months to make the decision to get another cat after the very traumatic death of my beloved Pumpkin (that is another story!).

The breeder, like so many do, kept her cats indoors and Sahara had never been exposed to the world outside. So, when we finally arrived home, after the lengthy car trip, and my husband opened all the car doors, and then the door to the carry cage, I expected the worst. Her whole experience to that point of time must have been extremely stressful. As far as I was aware, Sahara had never been outside, let alone in a long car trip. I did not know what to expect when she was faced with my dogs or the limitless freedom of the ‘great outdoors’.

To my astonishment, Sahara did not bolt, or hide, cowering under the vehicle. In fact she acted as if she had been to our property before. She walked around the plot to very specific spots, inspecting and checking things out. And then she marched right into the house. There are a number of buildings on our Benoni smallholding, any one of which could have been chosen, but she just ‘knew’ where she would be living with us. 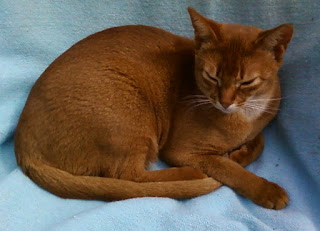 And so, our relationship began... Only someone who has been gifted with the lavish, demonstrative affection of a cat will understand what it is to be claimed as a cat’s special person. I was Sahara’s special person. The way she quickly settled in (and took over) was more than enough to convince me that Pumpkin had returned to me, in Sahara’s form.

When Sahara (also known as ‘Cat’) was three years old, my husband and I went to Europe for two weeks. In our absence, Sahara strayed from home. One morning, our neighbour saw her lying on our pavement. When he noticed that she was still there that afternoon, he called our son who rushed her to the vet.

Sahara had been struck by a car in the road outside our house, and, in spite of being paralysed in her hind legs with a broken back and having one dislocated elbow, she managed to drag herself to the side of the road and onto our pavement. The tenacity, hope and trust that she showed in that single act almost broke my heart. She was gravely injured, and yet still, somehow, made her way home where she knew she had always been safe.

Nine long days after the accident, I came home to hear the devastating news. I immediately took Sahara to my colleagues at Onderstepoort Veterinary Academic Hospital where she underwent a CT scan. Her third lumbar vertebra was fractured and there was a chip of bone in her spinal cord. It was inoperable. The advice from the specialist surgeon was to take Sahara home and see what would happen. Cats are known for their amazing recuperative powers, and he suggested we give her four weeks, and then try anything and everything we could to help her heal. I did exactly as the surgeon suggested, and so another stage in my personal and professional journey began. 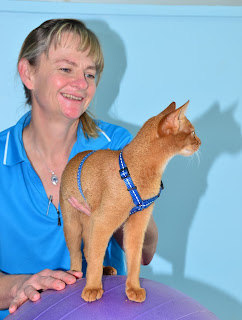 I had recently started my animal rehabilitation and pain management practice, and I passionately applied everything I had learned in my new practice to treating my beloved Sahara. I used acupuncture, massage, photodynamic (light) therapy and performed many range-of-motion exercises. I added Crystal therapy and Reiki and even asked my Wiccan friends to cast healing spells.
After three days of being treated at home, my precious Cat stumbled, unaided, through the cat flap to do her business.

Sahara improved daily. After six short weeks she caught (and promptly consumed) her first pigeon. She walked with a strange gait but was mobile, happily interactive, and appeared completely pain free.

When I took Sahara back to Onderstepoort to show her to the surgeon and radiologist they were amazed. In fact, the radiologist often includes Sahara’s CT scan in his presentations to this day.

Three months later, Sahara disappeared again. I searched for her and called for her for eight heartsore days. It was so unlike her to wander when I was home. I printed flyers, visited all the local vets and the SPCA – but to no avail.

Then, on day eight, I found her decomposing body under a tree, outside my Reiki/Healing room. Sahara lay peacefully, without any sign of external trauma. It is my belief she may have suffered an embolism which is a fairly common complication after the type of trauma she had suffered. It is also my belief, that it was her time to go.

What did Sahara teach me? She gave me the confidence to use my newfound skills, and reinforced my belief in the therapies I had adopted in preference over mainstream veterinary services. Her gift to me? You can do it, these therapies can make a significant difference, and never discount anything – use whatever is available, provided you do no harm.
Posted by Tanya at 11:04