More than a year ago there was a horrifying story in the news of a Husky that had chased and attacked three goats living at the neighbour. The neighbour retaliated by trapping the dog in an outside room and beating it to death. This process took more than an hour and the skull of the Husky was pulverised. The dog, however, did not die from this severe injury but rather, he drowned in his own blood. The ribs were fractured and the lungs punctured. The dog’s crime: chasing and injuring a number of goats. The punishment: death.

Why have I highlighted this story? It is gruesome. Usually my eyes flick over such excerpts because I choose not to fill my days with bloodshed, horror and negativity. I have raised this incident because there are points to be made about this scenario.

Firstly, it is never the animal’s fault.

Goats are herbivores. As such they are prey animals and not at the top of the food chain. When threatened, they instinctively run in an attempt to remove themselves from imminent danger. 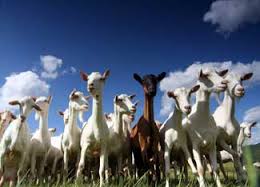 Dogs are carnivores. They sit at the top of the food chain. They hunt. They are instinctively geared to chase.

Bring dogs and goats together and there is a recipe for disaster.

Should the goats (domestic animals and in our care, as humans) have suffered the attack? No.
Should the Husky (also domesticated) have been given the opportunity to chase? Should his actions have been punishable by death? No, on both counts.

These animals were being true to their nature. The set of circumstances in which they found themselves, was not their fault.

Secondly, these precious beings are our responsibility.

Both sets of humans were at fault for allowing this sequence of events. The goat owner (I dislike this word – goat guardian) should have ensured protection for his 4-legged charges. He should have erected boundaries to prevent the attack; sufficiently high walls, electric fencing, thorny barriers, noise deterrents. There are many options. Since mankind has been herding animals they have grappled with this daily dilemma. Ignorance is not an excuse. Neither is laziness or a lack of funding. By taking on the goats, the humans acquired a responsibility for their safety especially because they had no option to outrun the dog.

The dog guardian could also be in the wrong. Huskies are working dogs, bred to be on the go all day. Was sufficient care taken to stimulate this dog both mentally and physically? Was he exercised? Was he given tasks to perform? Was there adequate training? Was the human aware of the breed’s natural tendencies? Did he place boundaries to prevent this and keep his dog safe? Was the dog moved into the house when there was no human supervision? Again, ignorance is not an excuse.

Both parties must take responsibility for their role in this bloody chain of events. Playing the ‘blame game’ will only lead to further victim mentality, and possibly more revenge. Stand up and own it.

The third point is about the nature of humans. We still have a reptilian brain. When placed under pressure we revert to survival mode, so-called ‘fight or flight’. The results are often fatal.

I believe we are on this earth plane to learn. We must face physical hardships and emotional traumas. How we deal with these events is our choice. We can continue to be reactive, as in this case. Alternatively, we can consciously strive to know ourselves and our soul, making decisions from this space instead.

We must focus on setting ourselves, and our animal companions, up for success.
Posted by Tanya at 16:38