A Tribute to Miller 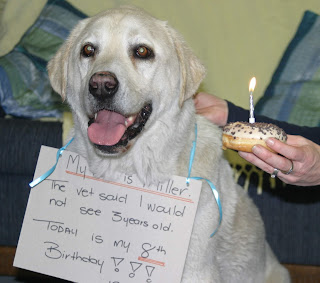 More than 10 years ago, as I embarked on my adventure in animal physical rehabilitation, a man and his dog walked into my new practice. The man was Bennie. The dog was Miller. Both had hearts of gold.

Miller, a handsome 17 month old Labrador Retriever, had been diagnosed with elbow dysplasia and given a very grave prognosis - cripple by the age of three. Bennie was determined to slow down the ravaging effects of the disease. So began Miller's hydrotherapy and our friendship.

Every week for the last decade Bennie has brought Miller to our facility for therapy - until this week. Miller's pain had become unbearable and unmanageable. He was tired. Death is the final healing.

Thursday afternoons at Animal Health and Hydro will never be the same. The hours spent swimming Miller, challenging him in 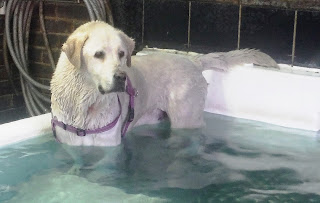 the pool, playing games and inventing new ones. Miller was my therapy, not the other way round.


During the process of saying goodbye Bennie remarked on how Miller was an angel in disguise for he was responsible for bringing the two of us together. Bennie and I have laughed together until tears streamed down our cheeks. We have competed, each one trying to outdo the other with the number of holidays and our holiday 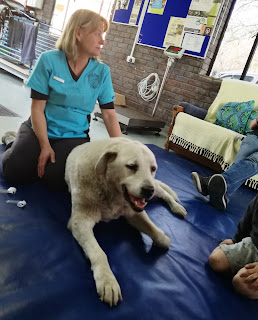 destinations. We have supported each other
through the birth of new business ventures and the birth of Bennie's son; through familial tragedies and accidents, to personal loss. I have treated wounds on Bennie's fingers following an unfortunate accident involving an electric plane. Bennie has lifted my spirits, with spirits, during times of depression. Bennie is a friend in a million. We met because of his dog Miller, a friend in a million.

Rest in peace magnificent dog that beat the veterinary odds. You always had your wings, now you can fly.