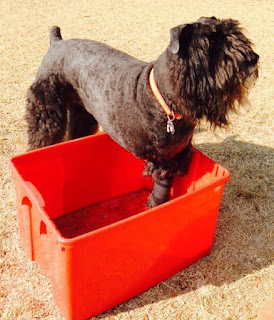 Pip had a front limb amputation just over one year ago. The reason for the amputation was osteosarcoma – bone cancer. What makes Pip so exceptional? Read on to find out.

Pip had been a hydro patient for a number of years prior to her cancer diagnosis. She has osteoarthritis of elbows and wrists (carpal joints) in both front legs. When she developed a nagging, pain in her right forelimb our original thought was that it was soft tissue injury and we increased her pain medication. When Pip failed to respond to this treatment, her guardian took her for radiographs at a trusted veterinarian: the same vet who had administered stem cell therapy to aid Pip’s arthritic joints. X-ray photos revealed a very small lesion at the top of the humerus which the vet biopsied. The results were devastating! Bone cancer...

Osteosarcoma is an extremely aggressive and painful cancer which attacks and spreads to other organs in the blink of an eye. Further radiographs revealed no metastasis (spread) to the lungs. The tumour had been identified soon enough to make amputation of the affected limb a feasible option.

The tough question now was, ‘Would a 9 year old  Bouvier des Flandres weighing close to 40 kilograms, cope on one arthritic front leg?’

Pip’s lust for life and spirit were so strong that her guardian chose the amputation route. This was followed by a course of chemotherapy to ensure that any nodules too small to be noticed, were treated.

Pip’s diet was changed to one best able to combat cancer as well as to encourage weight loss. Two weeks after surgery our team members were massaging Pip to help her to deal with a change in movement patterns brought on by the amputation. We also suggested an orthotic brace to support the left carpal joint. The adaptive process took a number of months.

During this phase Pip often lost her balance, or moved too quickly, and fell, hard, onto her chin. Each time a determined Pip lifted herself up and soldiered on. She often refused assistance. Many times her guardian asked me if she had made the correct choice. Should she not have opted for palliative care or only chemotherapy, rather than have Pip struggle through this adjustment and ordeal following the amputation?

Firstly, she has never given up. Secondly, she has never felt sorry for herself. Each time she falls, Pip rises to meet the challenge and live life. Thirdly, Pip has beaten the odds! Most osteosarcoma victims live 3 – 6 months from date of diagnosis if only palliative care is administered. If the limb is amputated and other preventive measures are taken, the survival time is 9 – 12 months. Finally, Pip is a teacher. I have learnt from Pip that there is no such thing as a wrong decision, despite the challenges we face as a result of that decision. There are only decisions made that are ‘right at the time.’ Given Pip’s incredible will to live and enjoyment of life, the decision to give her a chance was the best one.

No one was ready to say goodbye, not her guardian, and definitely not Pip. We have enjoyed Pip’s company for an extra year. Long may it continue!

P.S. Pip’s latest radiographs at 12 months post diagnosis show her lungs are still clear of metastasis. She weighs 34 kilograms. She is enjoying, and roughing it with, a new Bouvier puppy in the house.

Orthotics and Braces for Animals