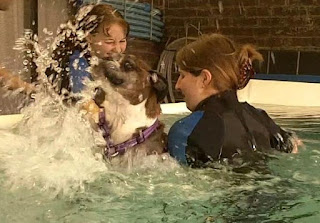 Very often our animal companions have more to teach us about ourselves than we would ever imagine possible. Devotion, consistency and non-judgemental honesty all come to mind. Sometimes, we meet a true hero in a companion, and it can change our perception of our own lives and what really matters.
Tyson was 12 years old when I met him. He had just undergone extensive surgery to repair a torn cruciate ligament in the knee. This procedure is costly and invasive and I was, quite frankly, surprised that it had been performed on a large breed dog of this age.
As a vet, I have often been called upon to discuss the pros and cons to the family of an animal companion facing surgery or some other form of costly, invasive procedure. Some issues are purely financial, others involve the likely success, risks and recovery factors of the procedure.  Other issues involve the biological stress on the specific animal companion and include the impact on the long term quality of life of undergoing a particular procedure.
Tyson, at first glance, would not have appeared to be an ideal candidate for such an expensive surgery and lengthy anaesthetic. He was clearly old, and blind in one eye. Notwithstanding his condition, his obviously devoted family opted to take the risks and costs of the extensive surgical repairs.
When it came to taking down Tyson’s history, I soon learned the true nature of his injuries and the source of his family’s unswerving commitment to achieving the best quality of life possible for him.
Matt told me that a couple years before Tyson’s operation, there was an attempted hijack at their home. The family were coming home, late, after a celebration of Matt’s birthday. As Matt was unpacking his gifts from the boot of the car in the driveway, he was stunned by an explosion and caught sight of the flash of a gunshot and watched in horror as Tyson fell. Frustrated by a closing gate the attackers fled, but not before Matt was able to look them in the face. It was 22:15 in the evening and a seriously injured Tyson was lying on the ground in a pool of blood after successfully defending his family from a potentially fatal attack. After a frantic drive and a number of desperate phone calls, Tyson got the medical attention he needed. He survived, but lost his eye to that gunshot.
Some time later, Tyson began to experience pain and inflammation in his one knee joint. His family used the prescribed anti-inflammatories to manage these symptoms but soon he was not able to bear any weight on the affected limb. When the family was faced with a decision regarding Tyson’s knee injury, rather than see him in pain for the rest of his life, they did not hesitate to choose surgery to repair the damage. They followed this with three months of physical rehabilitation at my facility. Tyson went on to walk well on the affected leg.

Fate had not finished with Tyson. Mid 2012 he was diagnosed with cancer. They were draining blood from him every few days and he was very ill. But just like the hero that he was, he fought valiantly to stay with his beloved family. After months of pain and discomfort, his family decided to take the step of letting him leave his this world. It was so very hard for them but they knew, from the depths of their hearts, that it was the right thing to do. Tyson touched his family’s life, like no other pet ever had.
Matt writes: “My parents said that they could not go through the heartbreak again. My dad was also diagnosed with cancer mid last year and life has seemed one endless battle. In June this year my Mom ordered a Boxer puppy. A house is not a home without a beloved Boxer. We received Harley on the 2 October 2013 and he is helping my Dad and the family tremendously. He is not Tyson but his own unique self, although we like to believe that Tyson is giving him guidance.”
From my perspective, it is easy to for us to pass judgement from a very human viewpoint. We do it all the time. Would I put my 11 year old companion through such an extensive surgical procedure? My initial response is no. I have had to re-evaluate that. This family made the decision which best suited all of them and honoured the life of a cherished, valiant companion. They believed Tyson deserved the best life they could give him and they did everything they could to ensure that, for as long as they could.


Is there a moral to the story? Absolutely! The value of our companions cannot be measured in monetary terms. So often they show us what it is to be fully human: how to live lives of unconditional, unselfish love and service. They show us what it is to be courageous, and to how defend those we hold dear without the slightest consideration of personal cost. They also teach us how to persevere and be patient in the face of suffering. And, as if that was not enough, they go on to bring out in us the noblest of human attributes:  generosity and appreciation.
Posted by Tanya at 12:20